The World Is To End Soon To Start Again 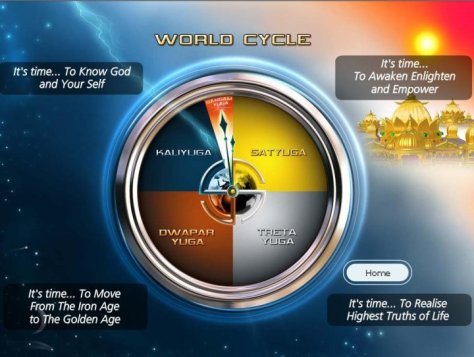 Albert Einstein commented about Mahatma Gandhi: “Generations to come will scarce believe that such a one as this ever in flesh and blood walked upon this earth.”

Gandhi was very certain about his life. He said ‘if I am bed-ridden waiting for death, you may conclude that I did not lead a proper life.’

His death came in a second and the smile on his face continued even on his dead body.

When the world is filled with greedy and selfish people, one can doubt, whether good people ever existed. But we know that many people like Gandhi existed in history.

History of Ancient India
Chinese travelers such as Fa-Hien, Hiuen Tsang wrote that education, hospital treatment, etc were free in ancient India. Kings were disqualified if a beggar was found in their kingdoms. The fatherly qualities of kings were so dominant that their original names were forgotten and they were remembered as Janak (father). The ancient history of India lists seven such kings by the name Janak.

This shows, the earlier you go into history, the better were the state of affairs.

According to the proven scientific equation E=MC2, energy can be converted into matter and vice versa. Hence matter or energy has no beginning or end.

Thus the universe has been existing from infinity in one form or the other. God’s role is to “renew” the provisions for life’s sustenance whenever they are depleted/destroyed by human greed. (Bible, Mathew 19:28; Bhagavat Gita 4:7).

When will the present Iron Age end?
Many sources point to the period revolving around the second quarter of the 21st century.

End as revealed in Bible
Bible foretells “before the coming of the great and dreadful day of the LORD” there will be “visions” given to people whom God finds worthy of receiving them (Joel 2:28-31). Jesus said this would not happen among his followers. Jesus said “Have you never read in the Scriptures: ‘The stone the builders rejected has become the cornerstone; the Lord has done this, and it is marvelous in our eyes? “Therefore I tell you that the kingdom of God will be taken away from you and given to people who will produce its fruit.” “Not everyone who says to me, ‘Lord, Lord,’ will enter the kingdom of heaven, but only the one who does the will of my Father who is in heaven. Many will say to me on that day, ‘Lord, Lord, did we not prophesy in your name and in your name drive out demons and in your name perform many miracles?’ Then I will tell them plainly, ‘I never knew you. Away from me, you evildoers!’”(Mathew 21:42, 43; 7:21-23)

Jesus said this because he knew some of his followers would remain as conflicted sects. Though he mentioned, “peace-making” as the identifying mark of “the children of God” (Mathew 5:9) they would refuse to bring unity among themselves.

In the year 1936, the eyes of God fell on a worthy person living in Sindh, in undivided India. His name was Dada Lek Raj and was 60 years old. God gave him six visions. One of these visions was how this old world would be replaced with a new world, the Golden Age. Then God commissioned him to herald this good news to the whole world. God renamed him, by his character, as Brahma (literally meaning the great mind. The one who treats God as his Father and others as his brothers and sisters). Many other spiritual seekers began to have “visions” as the Bible had foretold: “I will pour out my Spirit on all people. Your sons and daughters will prophesy, your old men will dream dreams, your young men will see visions” (Bible, Joel 2:28). These seekers began to be called Brahma Kumaris and Brahma Kumars (Brahma’s chaste daughters and sons). From 1936 onwards, God has been teaching them Golden Aged life, using His trance medium, as a modern-day oracle (which reminds us of The Urim and the Thummim, mentioned in the Bible (Exodus 28:30; Leviticus 8:8), used by the religious head to reveal the will of God).

Our Supreme Father takes measures for the recreation of heaven on earth. This perfect state of affairs remains for some time. Then its quality begins to decline through various stages. The Bible depicts such phases of history through various metals such as gold, silver, bronze, and iron (Daniel 2:32, 33). When the quality of the phase of history is like iron and clay, God sets up a kingdom of purity (Daniel 2:44). The same concept exists in the East. History is an eternal cycle of Kalpas made of Satya Yuga, Treta Yuga, Dwapar Yuga and Kali Yuga.

The period between the Iron Age and the Golden Age is called the Confluence Age. In this period the quality of life and environment declines to its worst level. Simultaneously there is a growth of golden-aged lives.

End due to Environmental upheaval
Humans have disturbed the ratio of nitrogen 78% + Oxygen 21%. Carbon Dioxide is being pumped into the air every year. The world pumped “37.1 billion metric tons” into the air in 2018 alone.

Fishes have started dying because of toxins dumped into the oceans.

Polar ice melting is going to wreak havoc in all the coastal areas of the world.

Five of the Solomon Islands in the western Pacific have disappeared due to rising sea levels over the past seven decades.

Some cities have started showing people vomiting blood because of pollution. Soon this will be common in other cities too.

Far-sighted ones say “the chances are about 49 percent that the world as we know it will collapse by about 2050”. This is mainly because of overpopulation and depleting resources.

Nostradamus describes the 2020’s as the “Decade Of Destruction And Transformation.”

All these points to the 2nd quarter of the 21 century as the period in which this old world is going to end and a new world is going to start. Once the old tree is destroyed, the sapling of the new tree begins to bloom. A recreation, a new world, a golden age, a new tree, begins again (Compare Genesis 1:27-31; 2 Peter 3:13; Revelation 21:1, 5).