Didi (Elder sister) Manmohini whose childhood name was Gopi was born in the year 1915 to mother Rukmani in Sindh, Hyderabad (presently Pakistan) in a very opulent, famous and respected sindhi family.  Didi and her mother had a family connection with Dada Lekhraj (later Prajapita Brahma baba).  She was also later married into a very wealthy and respected sindhi family.
Despite coming from a very rich family, Didi was not happy with the material wealth she was surrounded with.  She used to find true happiness in reading Bhagavad Gita and other scriptures.  She used to attend various satsangs and constantly engage in charity. She used to love Bhagwad Gita and stories of Gopis in it.  True to her loukik name, she used to visualize herself as a Gopi in her mind. She used to shed tears of joy while reading the stories of Shri Krishna and Gopis, often wondering how Gopis managed to meet Krishna. She had a deep longing of meeting Shri Krishna which made an ardent devotee.
Didi came into the organization in its early days in 1935-1936 along with her loukik mother Rukmini (later known as Queen mother).  Along with Mamma, Didi was one of the members of the Womens’ trust whom Brahma Baba surrendered his wealth to. Didi was a tireless social worker and was never shy in taking over institutional responsibilities from the very beginning.  She had surrendered her mind, body and wealth to the task of creating spiritual awareness amongst the masses. Didi was an ardent Godly student and never missed Godly versions till her last breath.  Didi used to intently listen to the Godly versions and apply them in her life, thus preaching what she practiced through practical example.  Didi was extremely loyal and used to practice economy in thoughts, words, actions and in the matters of finance. She was a true introvert and used to wake up at 2am to practice meditation.  Didi had a very deep love and unflinching faith in God Shiva, like a true Gopi she used to feel spiritual intoxication in God’s remembrance.  Didi had a keen sense of observing the virtues in others and grasping them.  Didi was an all rounder.  Didi used to do and get all kinds of seva done by being accurate and alert and on time. Didi never had any prejudices towards anyone and used to treat everyone equally.  She used to listen to both the parties before forming any judgement or giving any directions which used to be short, sweet and for the betterment of others. Through her dedication and hard work, Didi became Mamma’s (Jagdamba Saraswati) right hand in the administrative work of the organization.
Initially in the early 1950s, she used to be involved in administrative work.  After the India partition, Didi was tasked with finding a suitable place in India for the organization to move which would become the base of the organization.  After seeing a lot of places in Ahmedabad, Pune etc. Mount Abu was chosen because it was an ideal place for tapasya / spiritual effort making due to its peaceful and natural lush green mountainous terrain.

After Brahma Baba attained his angelic stage and left his mortal coil in 1969, she became the administrative head of the organization from 1969 to until her last breath in 1983.  Didi alongwith Dadi Prakashmani managed the Yagya in a very efficient way for 14 years. They were like two bodies and one soul.  They had utmost respect and love for each others’ opinions and used to take unanimous decisions in order to run the daily affairs of the organization.
Didi led a very simple life.  She remained an image of simplicity and humility. Didi had a special quality of making someone instantly at ease and make them feel a sense of belonging.  Didi would bind people together with spiritual and motherly love and give them solutions to their problems.  Didi had a very sweet and powerful drishti which made a lasting impression on peoples’ minds who met with her.  She used to make instant spiritual connection with people she met.  She earned the nickname “Manmohini” from Bapdada meaning “the one who enchants the mind”.   Along With being an intense effort maker, Didi was also very entertaining.  She used to listen or tell jokes in a very polite and royal manger. Her yogic life was not dry and humourless.
Those who have not met with her would know that Manmohini Complex at Shantivan is named in her honour.
Didi was simple, loving, accurate, alert, conqueror of sleep, loyal, responsible, efficient administrator, Yogi, arduous Godly student till the very end of her life.  Didi Manmohini left her mortal coil on the 28th July, 1983. 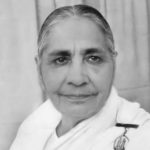