Her name was Rukmini but Baba lovingly called her ‘Allrounder Dadi’ as she was experienced and tirelessly yet meticulously accomplished all tasks allotted to her.

She was given 17 duties whilst she was in Pandav Bhawan, in Mount Abu. When she had to move to Delhi, her duties were distributed among 3 brothers which she performed them single handed. She was responsible for buying and cleaning of food grains, visiting and inspecting new premises, meeting with high profile personalities, guarding the premises, cooking and serving food, making ‘prasad’, etc.

She was brave, alert, active, courageous, an able administrator, economical yet royal. She was fearless; neither scared of people nor situations. She was strict, yet showered motherly love; never spoke of anyone’s shortcomings and with love, guided them to overcome those. She seemed strong like a man in a woman’s body.

An Epitome of Detachment and love

Her love for the Supreme and the Godly knowledge made sacrifice easier. Allrounder Dadi, never spoke her Mother tongue once the Almighty encouraged to converse only in Hindi, the language that He too used when He came.

She ceded her 9 year old daughter, Dadi Hridaymohini, lovingly called Dadi Gulzar, for the service and  objectives of the organization; and never thereafter, they behaved like mother and daughter but like any other Godly student. Once committed to the organization, Dadi never spoke about her family or other relationships. She said she had left them behind and was herself fully committed to the service of humanity and would never look back.

She spoke the Godly knowledge and explained the concepts of soul and time cycle with full authority of it. With connection with the Supreme, she had developed the art to sense what the other person’s heart yearned for; she gave just that and clarified all their doubts. This gave them a sense of satisfaction and sustenance. 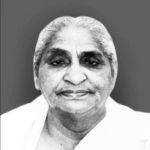