Dadi (elder sister) Brij Indra was the daughter-in-law of Dada Lekhraj (later known as Brahma Baba).  She was married to Dada’s eldest son Kishan and had two sons from the marriage. Dadi’s childhood name was Radhika.  She was from a very wealthy family.  Radhika used to love Shri Krishna and was his ardent devotee. She used to engage in devotion and all other kinds of charitable work.  She was very sweet, simple, modest and had very royal manners.  Radhika had many divine virtues.  Due to her simplicity and royalty, Dada Lekhraj had chosen her to be his eldest daughter-in-law.

Special role as the First witness of the Divine

In the year 1936, Dada Lekhraj had organised a sacred gathering at his home for his Guru. Many were seated to hear Guruji’s sermon, but the way Dada was sitting was the most unusual.  It was as if Dada is only physically present but he is mentally somewhere else.  It seemed as if it was not Dada but a figure of light sitting.  All of a sudden,  Dada got up in the middle of the discourse and headed towards his room, Dadi Brij Indra noticed this and informed Jashoda ji (Dada’s wife) who followed him as it was very unusual for Dada to get up in the middle of his Guru’s lectures.  Sensing that dada might need something, Dadi Brij Indra got up too.  She stood outside Dada’s room while his wife went back to the sermon.   What she witnessed was most amazing.  Dada’s face had turned red.  His eyes were shining as if a light was ignited within him.  The room was filled with light and with a very powerful aura.  Dadi also felt bodiless. Suddenly an ethereal voice was speaking as if from the heaven above, through Dada’s vocal chords.  The voice was initially slow, it gradually grew louder. It said “Nijanand Swarupam Shivoham Shivoham, Gyan Swarupam Shivoham Shivoham, Prakash Swarupam Shivoham Shivoham”.  After Dada opened his eyes, he looked around shockingly trying to comprehend what had happened. Dadi asked him, Baba what did you see? Baba said “What was that?  There was a light and might, some kind of a new world.”  The Light didn’t say who he was.  Dada just saw him as some Light and Might.  Since then Dada used to live in deep thoughts. Dada became introvert and used to spend his time in self-reflection and introspection.  Later Dada got to know that God Father Shiva had given his introduction after incarnating in Dada’s body.  This was the first of many instances in which God Father Shiva would incarnate in Dada’s body and give spiritual knowledge.  This experience was an unforgettable one for Dadi Brij Indra.

When Dada moved from Karachi, Pakistan to Mount Abu, India Dadi Brij Indra moved along with him and other members of Om Mandali. Radhika got the name of “Brij Indra” (one of many names of Lord Krishna) from God Shiva. Dadi Brij Indra was one of the members of the Womens’ trust created by Brahma Baba to whom he surrendered all this moveable and immovable property. For 16 years, from 1936 to 1952, Dadi tirelessly worked towards organisation related work. She drove a bus as a driver and did other mechanical work. She always was involved in tangible and subtle forms of service. She never considered any work as high or low. She treated everyone equally. Dadi followed God Shiva’s instructions to the word and was very honest and loyal.  She was a very keen Godly student and an intent listener.

Dadi Brij Indra was one of the first to surrender her jewels and wealth to Prajapita Brahma during the early stages of the organisation. In her early days of marriage, she had so many jewels that she was often looked upon by other royal families. But when Dada surrendered his wealth to the work of world transformation, Dadi too followed his footsteps.  Dadi’s elder son had passed away due to smallpox in Karachi.  Her younger son too passed away due to smallpox in Mumbai at the age of 35. Her husband remarried and moved abroad.  Dadi had so much love for God father Shiva, that she remained a detached observer and faced all the situations bravely with a smile on her face.

Dadi BrijIndra was a great orator.  She used to share her experiences in such a way that everyone used to get engrossed in listening to her recollection .

As the services in India increased, Dadi Brij Indra looked after the services in Maharashtra.  Dadi was the zone in charge of Maharashtra.  She spent more than 30 years in selfless service of various centres in Mumbai, mainly Sion and centres around it. Dadi BrijIndra left her mortal coil on 01 Jan,1990. She was an example of women empowerment.  In recognition of her tireless selfless services, Municipal Corporation of Mumbai named Sion, Mumbai fly-over in Dadi Brij Indra’s honour in Jan 2019.

Such is the legacy of Dadi Brij Indra who was an epitome of attachment free life, a great orator, who inspired others by not just her words but actions, one who had a very pleasant nature and had a very big heart for everyone. 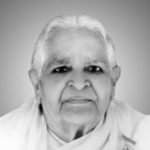