Dadi Hriday Pushpa was married when she was 18 years of age.  As per fate, her husband passed away due to sickness within six months of their marriage. Dadi was shocked and depressed to suddenly find herself as a widow.  One of her brothers had also passed away which added to her unhappiness.

One of her aunt’s suggested she meet Dada Lekhraj (later known as Brahma Baba).  When Baba asked her, who are you? She replied, I am an unhappy person.  Baba then explained to her that we are not mortal bodies but immortal souls. Peace and happiness is the true religion of the soul.  While listening to Baba, Dadi had a deep experience of peace and silence.  She felt as if the clouds of unhappiness were subsiding and rays of peace and happiness were falling on her soul.  Dadi no longer saw herself as an unhappy person but a happy soul.

Dadi Hriday Pushpa’s mother was also depressed with the sudden death of one of her sons and her daughter becoming a widow. When Dadi imparted the spiritual knowledge to her mother, she also liked the knowledge very much.  When Dadi told Baba of her mother’s emotional condition, merciful Baba instantly went along with Dadi to meet her mother. Her mother saw a glimpse of Shri Vishnu in Brahma Baba. After experiencing a state of deep silence and meditation, Baba explained spiritual knowledge to Dadi’s mother.

Dadi Hriday Pushpa’s father also realised the significance of spiritual knowledge.  He too started his journey on the spiritual path with the rest of the family.  Dadi’s parents continued to do spiritual service till their last breath and passed away in 1968.

Life as a spiritual social worker

Dadi HridayPushpa started her spiritual service from Bangalore, Karnataka.  Even though she could not speak the local language Kannada, Dadi performs her service on the basis of her personal divine experiences of spiritual knowledge. Dadi Hriday Pushpa was instrumental in imparting Godly knowledge to the King of Mysore.

Dadi Hriday Pushpa had deep faith and love for Baba.  She used to read Godly versions thrice in a day. When she used to sit for meditation, she not only forgot her body but also the material world.

Dadi Hriday Pushpa had a very strong will power.  Her thoughts had so much power in them that they would manifest in the material form too. For example, Dadi had a very strong desire to construct a building which would serve as a Rajyoga meditation centre and in the building she wanted to make a spiritual museum in the form of an incorporeal Shiva. During construction, Dadi herself stayed at the construction site for supervision until it was complete.

When there was a shortage of funds, she even sold two of the cars available for her convenience and use for center service. Dadi believed that possessions were not for personal use but for Godly service.

Dadi Hriday Pushpa had utmost faith in God Shiva and his teachings. Dadi never cared about her comfort she worked tirelessly for the spiritual upliftment of the masses. Dadi Hriday Pushpa used to remain busy in sharing Godly knowledge and Brahma Baba’s characteristics to everyone.  Everyone used to experience Dadi as a divine figure. They used to draw blessings and inspiration from her.

Dadi Hriday Pushpa was an epitome of honesty, obedience, truth and loyalty.

Dadi Hriday Pushpa was always immersed in the love for God, whoever saw her, immediately realized the divine connection.

Dadi Hriday Pushpa was the keystone instrumental in sowing the seeds of Godly knowledge and Raja Yoga in South India.  As a practical example of Dadi’s penance, will power and principles, there are thousands of centres in South India (Karnataka, Andhra Pradesh, Tamil Nadu and Kerala).

Dadi Hriday Pushpa’s patience, dedication and perseverance made her instrumental in creating a remarkable spiritual museum which is one of the landmarks in South India.

With life devoted to spiritual service which continued till her last breath, Dadi Hriday Pushpa left her mortal coil on 15 July, 1996. 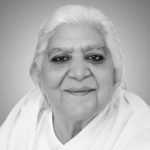