When Dada Lekhraj experienced divine revelations and he started his spiritual journey, news of Om Mandli reached Dadi Manohar Indra too. One day, when Dadi was passing by the street, she heard an enchanting sound of “Om” coming from Dada’s house.  She went into the house to take a further look.  She saw members of Om Mandli sitting in deep silence and meditation.  Dadi was so ecstatic seeing so many people engrossed in the love of God, the vibrations made her feel an instant connection with God.

Since the age of 12, Dadi Manohar Indra was interested in social work and wanted to serve humanity. She had a deep longing of experiencing God’s true love.  However, Dadi felt unhappy as there was no sign of such divine love in the material world. Dadi Manohar Indra was instantly hopeful when she experienced the divine love that she had always wished for, when she came into contact with Om Mandli.  After finishing her basic spiritual course, Dadi Manohar Indra could sit in deep silence for hours.  Dadi used to remain in the essence of Self-realisation state that is consciousness of soul and “Peace” which is soul’s true nature.  Dadi Manohar Indra practised this stage a lot.  Her interest in spirituality started to increase day by day.  After some time, when her loukik (biological) father passed away, there was chaos around her, but Dadi was mentally strong and at peace.  Dadi used to console her family saying that the body is mortal, the immortal soul is peaceful.  Everyone in the family felt peaceful vibrations from young Dadi and overcame grief.  Dadi’s peaceful and poised aura left an everlasting impression on the family.

Seeing positive changes in Dadi Manohar Indra’s personality, her family initially allowed her to attend Om Mandli spiritual gatherings but they turned against it as she started to grow-up.  They wanted her to leave the spiritual path and get married and settle. Dadi Manohar Indra was very determined to stay on the spiritual path. Through the power of love and peace, Dadi finally managed to convince her mother, sisters and brother to allow her to continue on her chosen path.  They finally gave their permission in writing. Dadi Manohar Indra happily surrendered in the Godly University in 1937 after receiving spiritual knowledge in 1936. This is when Dadi personally met Brahma Baba for the first time. Dadi immediately felt a deep spiritual connection and a sense of belonging after meeting Baba. Brahma Baba had a pure and powerful aura around him which everyone found very captivating. When Dadi Manohar Indra looked at Baba standing with everyone, she felt as though Baba was a moon – calm, serene and pure standing amongst all the stars.

Dadi Manohar Indra loved to study.  She was always the first one to do the homework when Baba used to give essays to write. This increased her power to churn spiritual knowledge.  Baba also taught them to be an outstanding orator.  Baba used to say encouraging words for her like “this one is a river of knowledge, a true lioness.” There were other 10-12 sisters like Dadi. Baba used to lovingly call them “Manohar party”. The group used to churn knowledge, prepare lectures and used to do all types of spiritual service. Baba used to send Manohar party wherever there was necessity for any type of service.

Dadi Manohar Indra and Dadi Gange had a fine tuning and usually used to go together for seva. Baba used to call them “Har Gange, Har Gange” (Hari was Dadi Manohar Indra’s childhood name).  Baba used to say to them, go for spiritual service and cleanse everyone’s sins like the Holy Ganges.

After 14 years of penance and intense effort making, Om Mandli shifted from Karachi, (now in Pakistan) to Mount Abu, India. Baba sent Dadi Manohar Indra and various other brothers and sisters to all the corners of India for imparting the spiritual knowledge they had received from Incorporeal God Shiva for the spiritual upliftment of humankind.

Dadi Manohar Indra started her spiritual service by imparting the knowledge to her immediate family, relatives, friends, etc. thus setting an example of “charity begins at home”. Dadi then went to Chandni chowk, banks of Yamuna river in Delhi. Rumours spread everywhere that Brahma Kumari sisters hypnotise people, the report of the rumours reached Indira Gandhi and Pandit Jawaharlal Nehru. Even CID got involved to investigate the matter. Four female agents were assigned the task to follow, interrogate the sisters as well as some of the people who attended the spiritual gathering in Yamuna nagar city. Upon investigation and interrogation of various members the agents realized the truth that these sisters do not hypnotise anyone or commit fraud or exploit people. They are selfless spiritual social workers. They realized that the spiritual knowledge taught by them is unique and the task of bringing about spiritual movement for the upliftment of humanity and world transformation is none other than God’s work. The agents mentioned this in their report which also reached Indira Gandhi and Pandit Jawaharlal Nehru.

After Delhi, Dadi Manohar Indra did service in Punjab, Lucknow, Patna and Karnal.

All rounder and ever ready

Dadi Manohar Indra had a gift of being a raconteur. Her skillful narration of the early days of the organisation used to bring Brahma Baba’s character back to life in the minds of listeners who had never had the fortune to meet Baba in person.

She was also the in-charge of Womens’ wing of Brahmakumaris organisation.

Dadi Manohar Indra had deep love for God Shiva’s work. Dadi was instrumental in imparting God Shiva’s knowledge of world transformation by encouraging humankind to give up vices and imbibe virtues and to lead a pure and peaceful life till her last breath. 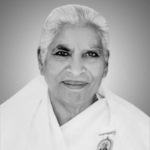