Dadi (elder sister) Pushpa Shanta was from a very wealthy family in Sindh, now in Pakistan. Her name was Guddi Mahtani before her spiritual life. Brahma Baba used to lovingly call her “Guddu”.  In the year 1938-39, based on a spiritual calling, Dadi Pushpa Shanta surrendered her life for the spiritual upliftment of human souls and free them from the bondage of vices and inspire them to lead a virtuous life.

Dadi Pushpa Shanta was from a regal family. She was a mother of five children. She used to reside with her family in Yokohama, Japan. Dadi’s husband was so rich that there was a caretaker for each child.

After receiving a deep spiritual calling, when Dadi Pushpa Shanta surrendered her life and started walking on the spiritual path, she initially took her children along with her.  Later her husband took back the children with him and remarried. Her husband offered her to take whatever she wanted with her, but Dadi Pushpa Shanta didn’t take anything. Dadi even handed back the gold chain she was wearing at the time to her husband.

Dadi Pushpa Shanta’s fourth daughter, Suputri (later known as Mata Vishnu Priya in her hermitage) was married into wealthy and generous Vatumal family.  Vatumal family’s assistance was instrumental in building the Global Hospital in Mount Abu which provides medical services to the needy. Vatumal family had deep love and respect for Dadi Pushpa Shanta especially her son in law Khuba Vatumal. Dadi’s inner beauty, loving nature and smiling face had a profound effect on everyone who came in contact with her.

A linchpin of spiritual sustenance

Being a mother, Dadi Pushpa Shanta had the maturity and the qualities to provide spiritual sustenance to the young sisters. Dadi used to stress the importance of four subjects taught in the Godly University – knowledge, meditation / remembrance of God, practise by actions and spiritual service.  Dadi Pushpa Shanta used to specially bring attention of the young sisters on the inculcation of purity in thoughts, words and actions.

Dadi Pushpa Shanta had a very clean conscience, deep love and sense of cooperation towards everyone.  Dadi wanted everyone to experience close proximity or relation to the Supreme.

Dadi Pushpa Shanta had cancer, diabetes, blood pressure, tuberculosis and heart ailments. However, she never talked about her ailments or showed any signs of pain or sadness on her face. She had to take various treatments however, she always used to wake up early morning (Amritvela) for morning meditation.

Dadi Pushpa Shanta was a great cook.  She used to love cooking variety dishes for offering to God. Dadi also used to love to teach cooking.

Dadi Pushpa Shanta had a knack of seeing virtues in everyone.  Dadi had immense power of discernment.  She used to immediately recognise qualities or values in each and make them even more valuable. Dadi was an all-rounder, she never shied away from any type of service.  Dadi also made many all-rounder hands like her. Almost everyone who was a member of the organisation since the early days in Mumbai has received spiritual sustenance through Dadi Pushpa Shanta.  Sister Chandrika (Mahadev Nagar, Ahmedabad), Sister Vedanti (Africa), Sister Hemlata (Trinidad), Sister Sushma (Jamnagar), Brother Nirvair, Sister Dr. Nirmala, Sister Sheilu and many such valuable jewels have received spiritual sustenance through Dadi Pushpa Shanta.

Dadi Pushpa Shanta had five children- 2 girls and 3 boys.  Out of them, one daughter became a hermit who was known as Mata Vishnu Priya amongst her followers.  She was earlier married to Khuba Vatumal.  Dadi’s son in law had deep regard and love for her.  He built Global Hospital in Mount Abu in Dadi Pushpa Shanta’s remembrance. One of Dadi’s sons and son in law opened a centre in Colaba, Mumbai.

Dadi Pushpa Shanta had immense control over her mind and body.  Death by wish is mentioned in many epics and scriptures like Bhishma Pitamah in Mahabharata.  However, no one had seen a live example of how one can willingly renounce the body.

During the final days, Dadi Pushpa Shanta was admitted to a hospital due to chest pain. Dadi did not want to get admitted, she kept saying that I want to spend my final moments at the centre. Because of doctors’ suggestion Dadi was admitted to the hospital. In the morning on the next day, after freshening up and listening to the Godly versions, Dadi asked sister Mohini who was with her at the hospital – “what time is it”? To which sister Mohini replied it’s 7:45 am.  After which Dadi sent sister Mohini to do spiritual service of all the doctors in the hospital and told her to inform the doctors that Dadi will leave her old body at 8.30 am. At 8.25 am, when sister Mohini and all the doctors were present, Dadi left her mortal coil to the tune of spiritual music in the remembrance of God. Doctors and the staff in the hospital were surprised to see a person renouncing their body and they experienced how a Rajyogi soul leaves the body through will power.

Dadi Pushpa Shanta left her mortal coil on 7th February, 1983.  Dadi is remembered as peaceful, resolute and living her life as a practical example of Godly knowledge. Dadi had special qualities of providing spiritual sustenance to everyone who came in contact with her. 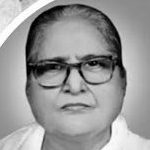