Rajyogini Brahma Kumari Dadi Ratan Mohini was born on 25-3-1925, at Hyderabad Sindh. When barely twelve years old, Dadi came in contact with the Brahma Kumaris. Since childhood, she had an inclination for spirituality, thus dedicating her life for godly service and taking a vow to observe celibacy throughout her life. Dadi is of an intellectual bent and from a young age was encouraged by Brahma Baba to study and write about her understanding of BK concepts. A deep thinker and insightful speaker on any spiritual subject, Dadi exemplifies a life of purity, peace and elevated purpose.
In 1950 after fourteen years of solitude and intense meditation, along with all the other students of the vishwa vidyalaya, she came and settled in Mount Abu.
In 1954 Dadi represented the PPBKIVV at the World Peace Conference in Japan. Dadi subsequently travelled in Asia for nearly a year, rendering spiritual services to people in Hong Kong, Singapore and Malaysia. From 1972 to 1974 she played a major role in the establishment of BK centres in the United Kingdom. Since then Dadi has been based in India but has travelled throughout Africa, North and South America and the Caribbean, Europe, Russia and Asia. In India she is known for the large youth marches and rallies which she has organized or guided. 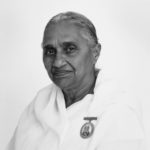 The deeper the roots of a tree, the stronger and more durable it is. Similarly, how deep are the roots of renunciation and tapasya of the people who run any organization, that organization is equally powerful, long-lived and free of obstacles. Prajapita Brahma Kumaris Ishwariya Vishwa Vidyalaya is a unique organization in this sense. Each and every founding member of this organization (Adi Ratan), are such ascetics who, keeping themselves, their sacrifices a secret, tirelessly, selflessly under the guidance of the Almighty, did spiritual service for humanity.

Prajapita Brahma Kumaris Ishwariya Vishwa Vidyalaya has had many such precious genesis Jewels who have played an important role to make the organization what it is today. They have been the building blocks and have taught through example. The lessons learnt from them are our priceless heritage. Since the inception of this huge Organization, they were instrumental in maintaining its order and growth.