Dadi (elder sister) Shantamani was born into a very prosperous and influential family in Sindh-Hyderabad. After Brahma Baba’s loukik family, Dadi Shantamani’s family was one of the first families to surrender their lives for God’s work.  At that time, she was 13 years of age. Her childhood name was “Leela”. Dadi’s grandfather Pratap Sakhrani was very simple, honest and a great believer in God.  Dadi Shantamani’s parents were Rijhumal Sakhrani (father) and Sati Sakhrani (mother). They were a very happy couple.  Dadi’s father was very intelligent and hard working man.  He had a successful business in Sri Lanka due to which the family’s financial condition was very good. Dadi was one of five sisters and one brother. Dadi Shantamani had a maternal aunt by the name of Rocha (Rukmini) who had recently become a widow at that time. Rocha had three daughters – eldest Parvati who was married, then Radhe (later known as Jagdamba Saraswati or Mamma) and Gopi.  By biological relation, Dadi Shantamani was Mamma’s cousin sister.

Dadi Shantamani had a second maternal aunt by the name of Dhyani (because during the early days of Om Mandli she often used to go into trance or dhyan). She also surrendered to Godly work since the beginning. Baba used to call her “Mishri” (sweet) because of her sweet nature. This way, during the early days of the organisation, Dadi Shantamani was one of the key member of the surrender family.

Change in the direction of life through an epiphany

Dadi Shantamani’s father was an ardent worshipper of God.  Dadi’s mother used to read holy scriptures like Gurumukhi Granth, Jap Sahib, Sukhmani to all her children every evening. Due to this, all the siblings were very fond of spiritual gatherings and had a deep sense of morality and virtues in them from a very early age.

In 1936, when Dadi Shantamani along with her loukik mother saw Brahma Baba, Dadi felt as if she is meeting her true Father of many births and she saw Shri Krishna in Brahma Baba. After that day, Dadi Shantamani used to visit Jashoda Niwas to see Brahma Baba daily after school.  Dadi experienced self realisation through Baba.  Baba also explained the three worlds – Deity world, human world and demon world.  Baba said if you want to go into the deity world, you need to inculcate divine virtues and resolves and imbibe spiritual knowledge.  From that moment on, Dadi Shantamani developed deep love for Godly knowledge, she started visiting Baba regularly and started studying spiritual knowledge with great eagerness and enthusiasm.

One amongst the five birds

During the initial stages of the spiritual gathering (known as On Om Mandli) Brahma Baba had built a building to be used as a school.  This school became a training centre where spiritual knowledge and other vocational skills like sewing etc. were taught to the female members of the gathering and was also a school for small children. The school was inaugurated in 1937 during Diwali.  Five sisters were given the responsibility of teaching small children. Dadi Shantamani was one among them.  Brahma Baba used to address this team of five as “Five birds”.  Dadi Shantamani was 14 years of age at that time.

Dadi Shantamani is among the eight jewels shown along with Brahma Baba and Mamma in one of the exhibition pictures of Kalpavriksh which depicts the story of the world drama and shows the origins of the human race in chronological order. Due to Dadi Shantamani’s peaceful nature, other qualities in her were clearly visible to people around her.  Brahma Baba used to say for Dadi Shantamani that ever since this child has come into the organization, she has displayed various qualities due to her peaceful and loving nature. Baba used to call Dadi “true penny” because of the virtues of truth and honesty in her. Baba also used to call her “Har ki Pauri” (a holy place which is believed to be the exit place of the river Ganges from the Himalayas) where pilgrims from all around the world flock for a dip in the holy waters to purify themselves. Dadi Shantamani was also like “Har ki Pauri” who used to purify the minds of everyone who used to visit Madhuban, Mount Abu through her life experiences and nectar of spiritual knowledge.

Dadi Shantamani’s height, face and voice were similar to Mamma’s. Anyone who used to meet Dadi Shantamani used to feel as if they were meeting Mamma.

Like her name, Dadi Shantamani was a magnet of peace. Dadi used to radiate peace. Most difficult tasks used to become easy by Dadi’s mere presence.

Dadi Shantamani was a complete trustee.  Dadi always considered herself to be an instrument of God and fulfilled her spiritual services responsibly.  Dadi Shantamani never compared herself with anyone and did not waste her time in small talks. Dadi Shantamani was solution oriented, when facing a challenge or problem she never spun a web of unnecessary questions like who, what, why, how etc.; Dadi overcame the challenges with the utmost faith in God. Dadi Shantamani was a true effort maker, she maintained her calm state of mind in all situations without any material salvation.  Anyone who used to come to Dadi with a problem used to immediately forget all the worries by looking at Dadi’s peaceful and angelic face.

Dadi Shantamani had a deep love for God and his versions which she followed till the end of her life.

Dadi Shantamani had immense power to accommodate.  Dadi never broke the confidence of anyone who confided in her and never spoke about anyone behind their backs.

Dadi Shantamani always spoke very lovingly with everyone. No one has ever heard Dadi saying hurtful words or talking loudly with anyone.

Even when Dadi Shantamani was very ill, her illness never showed in her face. Despite being a patient, Dadi had immense patience. She was the epitome of the power of tolerance.

Dadi Shantamani left her mortal coil on 15th June, 2010. The memories of Dadi’s selfless actions, patience and tolerance like the Earth, peaceful and angelic face will always be a guide to the new generation. 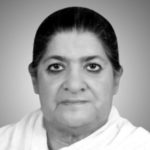