Hailing from a royal family, she was the younger sister of Didi Manmohini. Her entire family was one of the few families that committed themselves towards Godly service. She was one of Brahma Baba’s favorite messengers who got important messages for the functioning of the organization and through whom many secrets were revealed.

Clean hearted, compliant, accurate, dutiful were few of her qualities that made her achieve the spiritual growth that she did. She and all her family members had supported the organization in every way in its initial period since establishment.

She rendered her services for a long time at the Gamdevi centre in Mumbai when she left her mortal coil in 1996.

In 1968, when the World Renewal Spiritual Trust was founded, Dadi Sheel Indra was appointed its first trustee. In 1971, she was one of the 6 member delegates who had made an initial visit abroad and initiated the services there. She has played a pivotal role in establishing the Oxford Retreat Centre, UK. 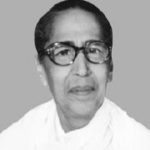