At 15, she was married to Brahma Baba’s brother’s son who used to work with Baba in his shop in Kolkata. Immediately, after they got married she moved to Kolkata and stayed with Baba since. She did everything that Baba instructed her to do as her husband did so too. Baba taught her to be strong and bear the physical pains without an ‘ah’, and to be straightforward in your relationships.

As a daughter-in-law, she had to speak less in front of Baba or not speak at all, and used to walk with her head bowed. According to the society of that time, one had to wear sari and salwar- kurta and walk with the head covered. But Brahma Baba did not follow any of this; he wanted her to live and behave like his daughter did. She never had to do any household chores; neither did she learn them as there were maid servants to do it all. The servants did all the work like cleaning, cooking, washing clothes etc. Being a member of the organization, she learned and performed all types of tasks. She stayed in Kolkata with Dadi Nirmal Shanta and contributed towards Godly services for some time.

Her belief in Brahma Baba was very strong; so much so that she considered him her parent, teacher and doctor. She had asthma attacks sometimes, but she never visited the doctor. Baba would touch her and her breathing would become normal.

On another instance, she had excruciating pain in her stomach and could barely stand on her feet. She refused to visit the hospital or undergo any surgery. Brahma Baba was concerned. He sat up all night, connected to the Almighty and blessed her. She felt as though there was a surgery going on in her stomach that night. Next morning, miraculously, she did not sense any pain and could walk straight. Her faith in the Almighty and Brahma Baba grew stronger. She had been with Brahma Baba even before it’s inception and until Brahma Baba attained his ascension.

Although from a rich family, she was very adjusting and accommodated herself well with changing times. A phase, when the organization had run out of funds and did have much for the sustenance of its members, Dadi did not complain; but found satisfaction in having a meal as simple as a roti with chopped tomatoes. In her opinion, it was the sweetest meal she ever had.

She kept the almighty always close to her. So deep and strong was her love that she never ever felt fear of anything. She once had to travel alone abroad. She neither knew English nor did she have any international journey experience. She made a trip to Jamaica, New York and other places. In her mind she’d say to the Almighty- ‘lead me’ and she would always find someone around to lead her in all situations. Never spoke to anybody whilst eating. She was always immersed in the sweet remembrance of the supreme.

An Epitome of Sacrifice

Dadi Santri had been the Chief Trance Messenger of the organization and was sent to bring messages or instructions for its smooth administration. When Brahma Baba reached ascension and left his mortal coil, a lot of instructions for the last rites and the general administration were required. At such a time Dadi proved herself to be the most humble, mature and one to make the biggest sacrifice. Although, on a few instances the Almighty had used her as a medium a few times; she refused to become the official chariot that the Almighty could use to come to this corporeal world.

She felt that since she has been the Chief Trance Messenger of the organization since its inception and knew many things about its functioning she wouldn’t be the right person for this at this point of time. She nominated Dadi Gulzar to become the medium as she too had been a private messenger for quite some time. She felt that even if the Supreme Soul and Brahma Baba’s soul together, lovingly called Baapdada, would come and speak through her, many may not believe Him. They would think that Dadi knows all this and she is the one speaking and not the Baapdada. She did not want anyone to have any such misunderstanding.

After 1969, we know Dadi Gulzar to be the chariot Bapdada uses and; love and respect her because of her ultimate sacrifice. This would have been Dadi Santri’s, had she not sacrificed the opportunity to become the medium. Our salute to such a ‘tyagi’ (sacrificial) soul. 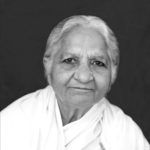