Dadi (elder sister) Gulzar (meaning a garden blossoming with roses or flowers) was one of the key founding members of the institution. Dadi Gulzar was the Chief Administrative Head of Prajapita Brahma Kumaris Godly World Spiritual University from April 2020 to March 2021.

Despite having no knowledge of religious scriptures, Dadi Gulzar experienced deep love for God and spiritual joy while listening to the Godly divine versions called murli.  Dadi Gulzar frequently went into trance from an early age and had many spiritual visions.

In 1950, when the organisation shifted from Karachi (now Pakistan) to Mount Abu (India), upon Baba’s direction, Dadi Gulzar started her spiritual service throughout India – mainly Delhi and Mumbai. Under her leadership many centres were opened in and around Delhi.

Throughout her spiritual journey, Dadi Gulzar visited upon invitation many countries around the world to connect people with spirituality, introduce them to Raja Yoga, teach the Art of Living and many other spiritual topics.

Dadi Gulzar’s face was always fresh like a blooming flower.  Her mere presence used to spread the fragrance of spirituality and Godly love. No wonder, Baapdada (Almighty God Shiva through his corporeal medium Brahma Baba) lovingly gave Dadi the name of “Gulzar” (garden full of flowers) and “Hriday Mohini” (the one who attracts the heart through her divinity).

Dadi Gulzar followed Godly directions immaculately. Despite having physical ailments until the very end, she was a tireless spiritual social worker.

Dadi Gulzar attained her angelic stage and left her mortal coil on the 11th March, 2021 in Mumbai. Dadi was 92 years of old.

Brahma Baba was the corporeal medium of God Shiva. Through Brahma Baba (also known as Bhagirath in the scriptures), God Shiva revealed Himself and imparted the spiritual knowledge of the Soul and Karma philosophy.  After Brahma Baba reached his angelic and left his mortal coil in 1969, Dadi Gulzar became God Shiva’s corporeal medium. Hence, Dadi Gulzar will always be remembered by the spiritual family as master Bhagirathi (Chota Nandi or small calf) who was God Shiva’s instrument to impart spiritual knowledge for the betterment of human souls. Dadi Gulzar in her subtle form continues to be Shiv Baba’s right hand in the work of world transformation. 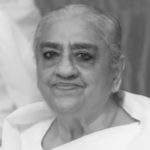