Dadi Nirmal Shanta was born on 25th October, 1917 in Hyderabad, Sindh (now in Pakistan) to Dada Lekhraj (later known as Brahma Baba) and Yashoda mata. Dadi’s childhood name was Parvati. Dadi was lovingly known as Palu. Because of her deep and affectionate connection with her mother, Yashoda mata became known as Palaama (Palu’s mother).

Dadi Nirmal Shanta was pampered like a princess with new clothes and jewelry for every occasion.  Dada Lekhraj never allowed his daughters and daughters-in-law to perform any household chores, always treating them like princesses and deities.

Her father Dada Lekhraj had inculcated the resolve of charity and donation in her since a very young age. Dadi Nirmal Shanta had a very regal presence and her habits were befitting those of the deities of the Golden Age.  Dadi Nirmal Shanta used to give away all her pocket money in donations to help the needy.  She never asked for anything for herself.  Despite having all the material things, Dadi Nirmal Shanta never felt attached to them.

At the age of 15, Dadi Nirmal Shanta was married to Moti Ram Mukhi, the son of the Head of Sindh with great pomp and ceremony.  Dadi gave birth to a baby girl named Ratna. Dadi Nirmal Shanta later become a liberated soul and left the material world behind.

Brahma Baba taught Dadi Nirmal Shanta the importance of service through thoughts, words and actions.  Dadi Nirmal Shanta learnt all kinds of service from sewing slippers to driving cars.  Dadi performed all her responsibilities very accurately and with great honesty and sincerity.  She displayed the example of Godly teachings through her practical behaviour.

Dadi Nirmal Shanta had a spiritual intoxication of being the daughter of a father who is “Three in One” because Dada Lekhraj was Dadi’s biological father, he was also the corporeal medium of God Shiva who is the Supreme Father of all the Souls whom they met through Dada Lekhraj aka Brahma Baba hence, Dada Lekhraj was her Divine father too.

Dadi Nirmal Shanta possessed a magnetic personality. Her words were sweet and actions were perfect. Everyone who came in her contact was pulled by her and felt the desire to attain something valuable from her. Her way of teaching was also very simple but mesmerizing.

Dadi Nirmal Shanta was regular and punctual in daily spiritual routine such as doing meditation at Amritvela (early morning), maintaining and checking chart (self-progress) from morning until evening etc. Dadi performed all her services punctually and accurately.

The Secret of Longevity

Dadi Nirmal Shanta possessed great will power. She wouldn’t talk about anything except Shiv Baba as if she was living through her will power and His (God’s) power. Despite suffering from diseases such as diabetes, high blood pressure and eating disorders, she would keep smiling. There was no trace of sorrow, pain, or worry etc. Besides, she would speak economically, slowly and sweetly. No one ever noticed her talking ordinarily. She would even ask others to remain quiet and inspire them to remember Shiv Baba as her words were accurate, apt and meaningful. She would make others happy through her sweet words.

Even during physical illness, there was no trace of sorrow on Dadi’s face. Even when she was undergoing critical health problems, she would meet the doctor and talk to him with a lot of love, give toli (sweet), and sing Baba’s songs; thus, keeping everyone spiritually replenished. And at the same time she would also remind them of Shiv Baba.

Whoever came to meet her was welcomed by her ever- cheerful face. There was no trace of pain on her face. She had an ever smiling, happy face like a blossomed flower. She would never elaborate on her health problems. There was no feeling of ageing on her face.

From 2006, upon Baba’s direction, Dadi Nirmal Shanta stayed in Madhuban. In 2013, after being quite unwell for a few months, she left her mortal coil on 15th March 2013 and ascended to the advanced party (souls who are instrumental to initiate the new world) to play her new role for the forthcoming Golden Age.

Dadi’s last rites were performed at Mount Abu on 16th March 2013 in the presence of thousands of BK brothers and sisters. Thousands of BK family members who got to meet her are still mesmerized by their divine experiences with her. The pearls of wisdom spoken by her are still transmitting the vibrations of zeal and enthusiasm to them. She will always remain in our memory through the indelible marks of her divine deeds. Multimillion salutations to such a divine soul! 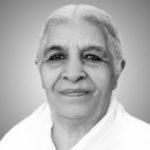