Bhau used to help Baba in his jewellery business during the early days. Bhau was a right hand man in business, like a son or younger brother to Brahma Baba. Dadi Santri was Bhau’s spouse.

Perpetual success as a blessing

Bhau Vishwa Kishore had utmost regard for Brahma Baba, which Baba reciprocated and Bhau used to follow Baba’s wishes or directions without any second thoughts. When Brahma Baba sold his business and retired to follow Godly directions and started “Om Mandli ” (spiritual gathering or satsang) to impart spiritual knowledge, Bhau along with his spouse Dadi Santri too followed Baba’s footsteps. The couple became the support pillars of the spiritual movement.  Bhau was responsible for buy and sell of property, buying clothes, making arrangements of car and bus etc. to carry out day to day activities of the organisation.

Bhau Vishwa Kishore had great love and regard for Mateshwari Jagdamba Saraswati  (Mamma) and all members of the organisation. Bhau was like Baba in many ways, he was free from all desires. Bhau Vishwa Kishore lived his life emulating Brahma Baba, had a great planning intellect which he used for spiritual service and followed each direction of God Shiva accurately till the end of his life. It was as if Bhau had received a blessing of being successful in whatever he did.

When the organisation was relocating from Sindh, Pakistan to Mount Abu, India, Baba had sent a group of experienced brothers and sisters to make the necessary arrangements for all. Bhau Vishwa Kishore was one of them. Bhau received the name “Vishwa Kishore ” (Vishwa – world; Kishore – young Shri Narayan or Shri Krishna) from the Incorporeal God Shiva because he was an intense effort maker. When Brahma Baba saw divine visions through Shiv Baba and Brahma Baba wound up his business to follow the divine visions; Bhau also wanted to follow Brahma Baba’s footsteps.  He told Baba of his heartfelt wish, however Baba told him to wait for sometime and continue to do what he did.  Obediently Bhau obliged Baba’s direction. Bhau remained happy in all the circumstances.  After some years, he received divine inspiration to surrender completely into Godly service which he immediately gladly obliged along with his family.

Bhau Vishwa Kishore was very experienced. He was a profound thinker, a great planner, sacrificing, loyal and honest person.  He had unflinching faith in God’s work. When he used to meet various people to carry out activities of the organisation, people used to ask him – what is your position in the organisation? Are you the secretary? Although, was one of the administrators, he used to humbly reply- “No, I am a humble Godly servant”. Even in letters, he used to sign as “Godly servant”.

In 1957, Ramesh Bhai invited Mamma- Baba to visit Mumbai. Bhau Vishwa Kishore arrived a few days before them. Bhau called Ramesh Bhai and told him to get his car and meet him as Bhau wanted to visit some place for service. After driving for some miles, Bhau said let’s go back to the centre as I have forgotten some papers; you come again tomorrow, we will go then. This happened the next day and for 3-4 days.

On the fifth day, Bhau said to Ramesh Bhai that you must have understood by now what I am doing. Bewildered, Ramesh Bhai replied- “I don’t understand, I come because I follow your direction”. To which Bhau said- “Ramesh, I am testing your driving skills. I wanted to make sure that Mamma and Baba will be in safe hands when they sit in your car with you driving it”. When Mamma and Baba arrived in Mumbai, Ramesh Bhai got to know them closely because of passing in Bhau Vishwa Kishore’s driving test.

Just like Shri Hanuman used to always worry about the protection of Shri Ram and Sita, Dada Vishwa Kishore used to care about Mamma and Baba’s health.  When Mamma was diagnosed with cancer and was being treated in Mumbai, Bhau himself had made all the arrangements of operation and other treatment. Such was Bhau’s love for the Mamma, Baba and God’s spiritual work that he was always active in any kind of service.

Pandav Bhawan was bought in Bhau Vishwa Kishore’s lokik name. Bhau was of the opinion that it should be under the name of the organisation and not his personal name.  Bhau had arranged to make a transfer deed through top lawyers from Mumbai and Delhi. When the papers were ready and he took them to Brahma Baba, Baba did not accept those papers.

Later when Dada Vishwa Kishore’s prostate operation date was decided, Dada prepared the papers again, this time through Ramesh Bhai. Before the operation, Dada and Ramesh Bhai planned to travel to Mount Abu to meet Brahma Baba for his approval.  Dada asked Ramesh Bhai to also carry the legal paperwork that Ramesh Bhai had prepared. Dada said to him, we will transfer the ownership from me to the organisation, if Baba agrees. They met Bholi Dadi when they arrived at Abu Road railway station. She had a letter from Brahma Baba which instructed them to freshen up at the station and get the papers registered. Once the papers were registered, they went up to Pandav Bhawan. They met Baba later in the evening. Baba was pleased as Bhau got his last wish. In this manner, because of Bhau’s paperwork, Ramesh Bhai received a blessing from Baba that he would carry out all the legal paper documentation for the organisation in the future.

When Bhau Vishwa Kishore and Ramesh Bhai were going to leave for Mumbai the next day, a unique thing happened. Usually Baba never liked to have his photographs taken, but that day Baba called Chandrahas bhai to have their photograph taken. In the photograph, Baba was standing in front of a car flanked by Bhau Vishwa Kishore and Ramesh Bhai on either side.  This photograph became a memorable one as it captured the last meeting between Brahma Baba and Bhau.

When Bhau Vishwa Kishore and Ramesh Bhai sat in the train, Ramesh Bhai had a nagging question in his mind.  He asked Bhau why Baba himself asked the photograph to be taken. Bhau unravelled the mystery, replying that it was his last meeting with Brahma Baba.  Bhau knew that he would not recover from the operation and five days after the operation, Bhau Vishwa Kishore left his mortal coil on 12th March, 1968.

Dadi Santri and Dadi Prakashmani carried out the last rites by Brahma Baba’s instructions in Mumbai.

Dada Vishwa Kishore was Baba’s true heir. Bhau was most obedient, loyal, honest and Baba’s right hand. He was self sacrificing and never had any desires for himself. Bhau was an embodiment of sacrifice and penance. Until the present, Bhau Vishwa Kishore is an inspiration to the new generation of Brahmins who aspire to follow Brahma Baba’s footsteps through his lifework 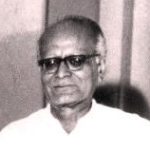